What To Do In a 3 Day Girls Weekend In Charleston 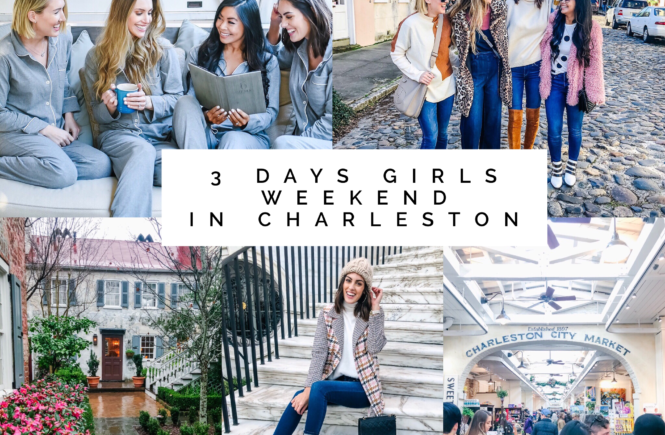 Happy Wednesday friends!! It’s already been two weeks since I had my girls aka moms weekend in Charleston and I am missing it so much.  This was my third time going in the last two years and I seriously never get tired of it; it is one of my favorite cities in the US.

Today I am excited to share where we stayed and what we did while we were from a quick weekend trip.

During this trip we stayed at the cutest boutique hotel called Zero George.  I have honestly been dying to stay here for so long ever since I heard Julia Engel from Gal Meets Glam talk about it years ago, and once we arrived it did not disappoint.  Zero George’s immaculately restored buildings from the 1800’s and private courtyard were the ideal first view of Charleston’s cute allure.  It is comprised of sixteen lush guest rooms and studios in three painstakingly restored historic residences and two brick carriage houses that surround our private garden courtyard.

The girls and I were super excited to stay in one of the two brick carriages house on the top floor in their garden suite, which contained a large master suite and living area space.  For four mommy fashion bloggers, this was the ideal location to spend two nights.

From the room, to the cuteness of the hotel and the amazingly attentive staff…it was a dream. 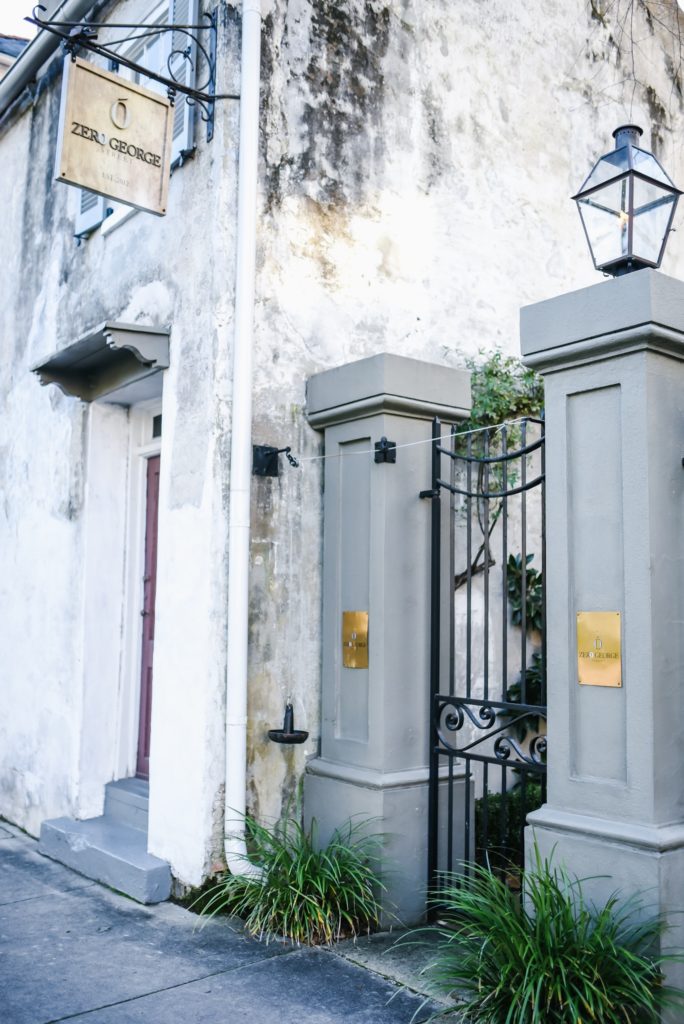 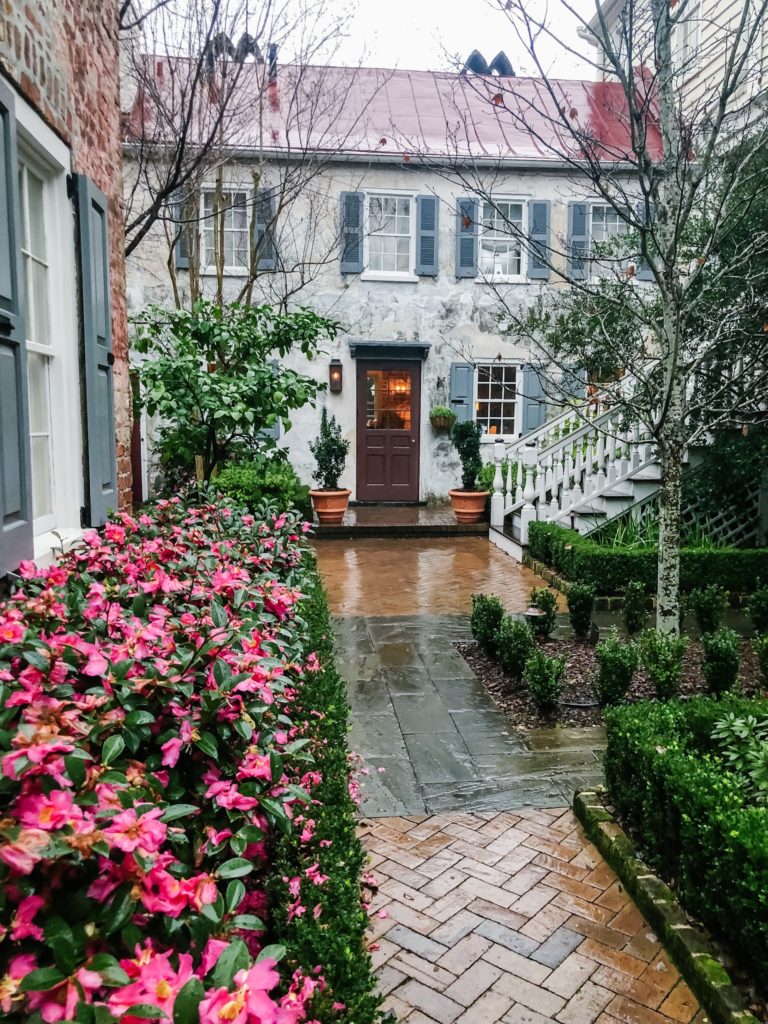 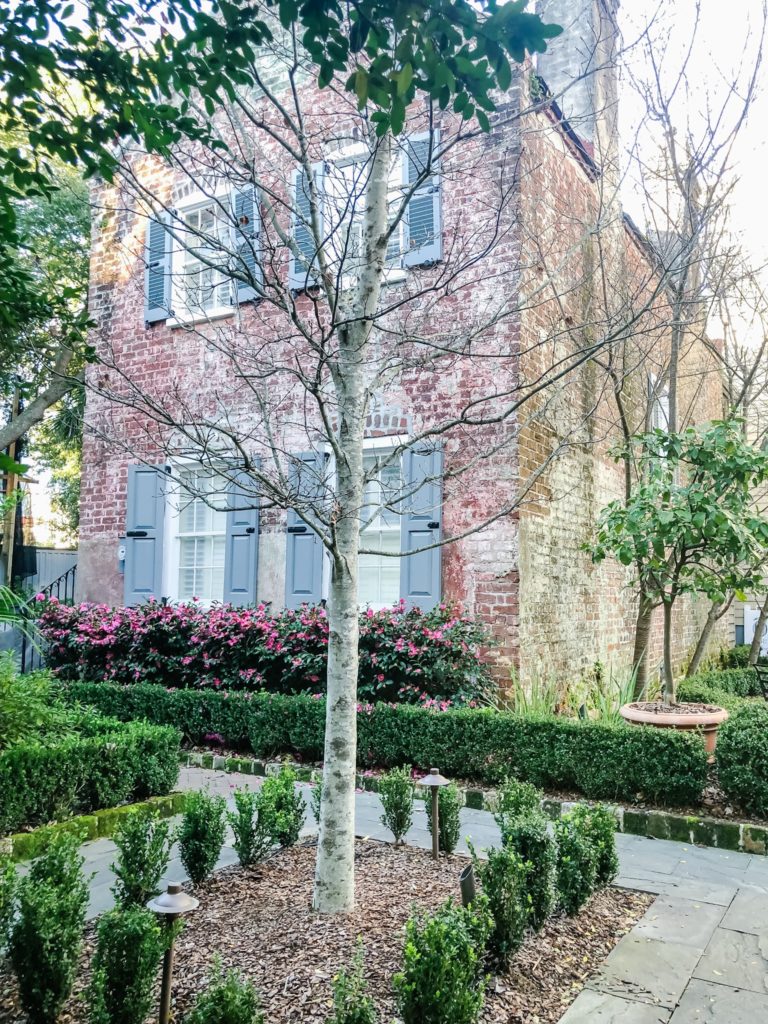 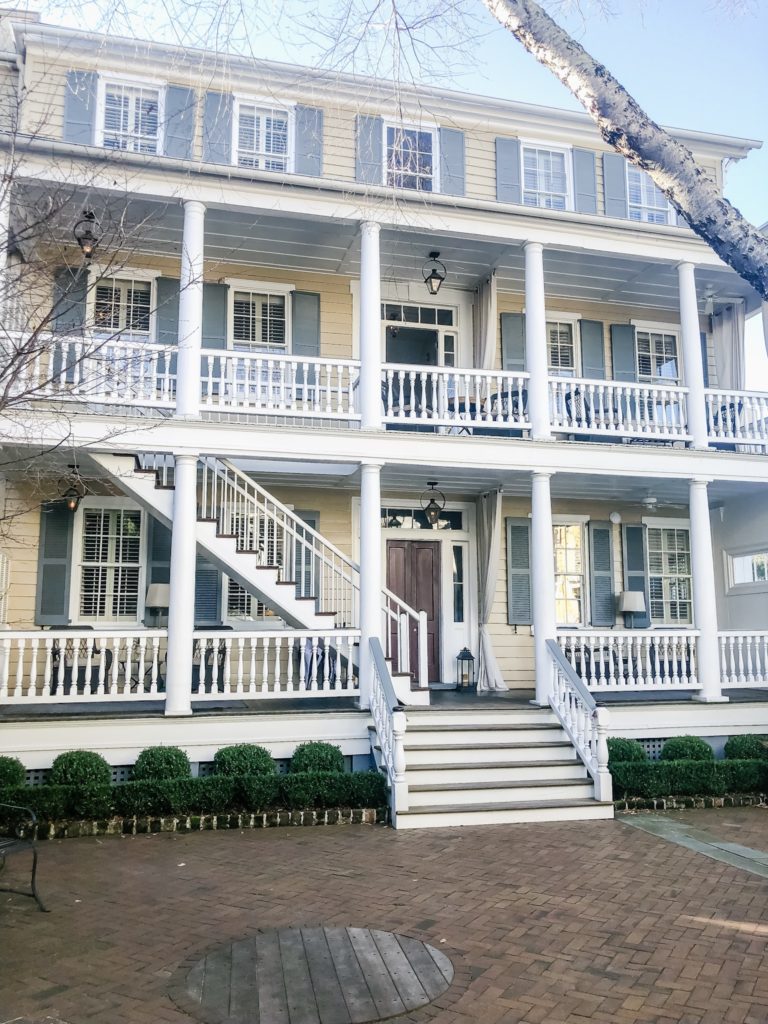 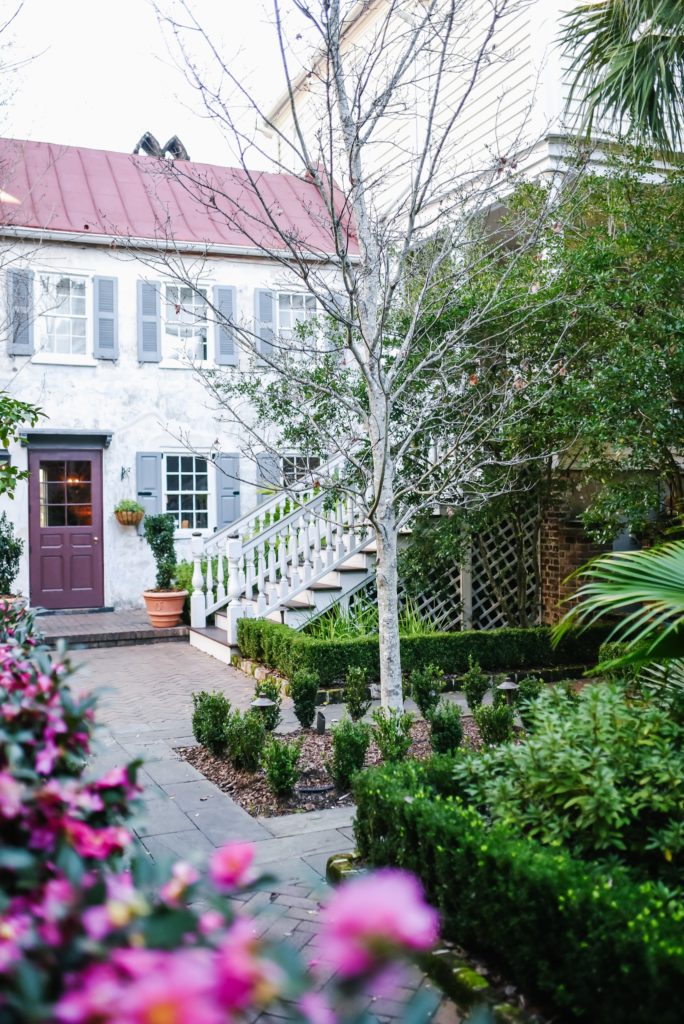 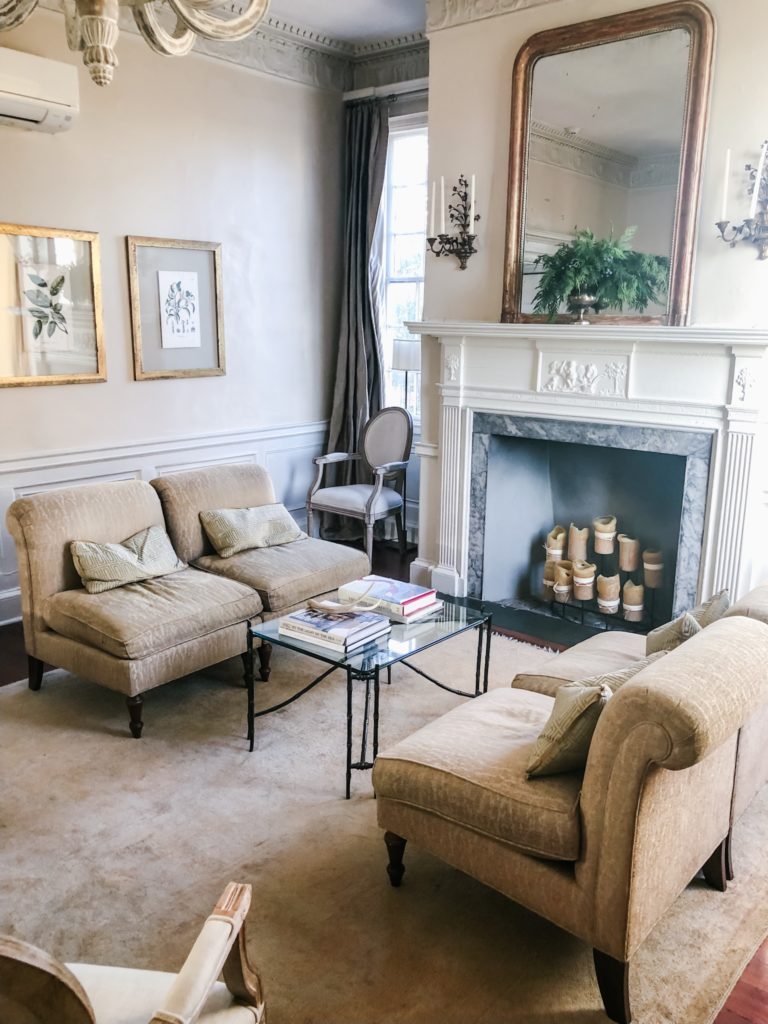 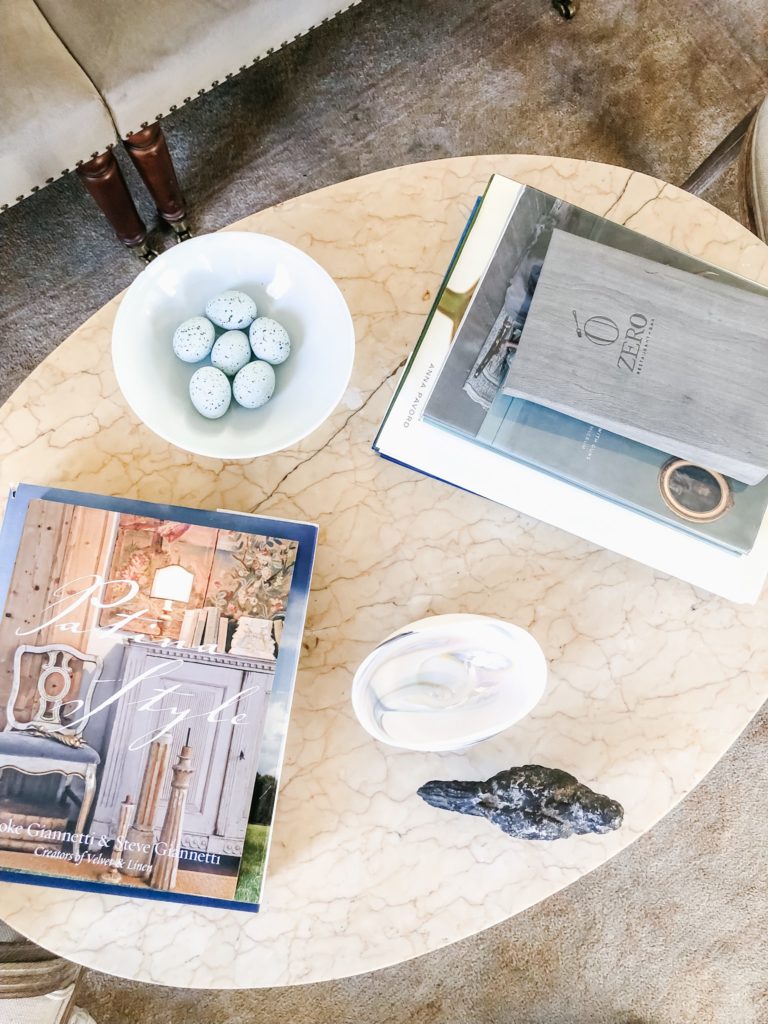 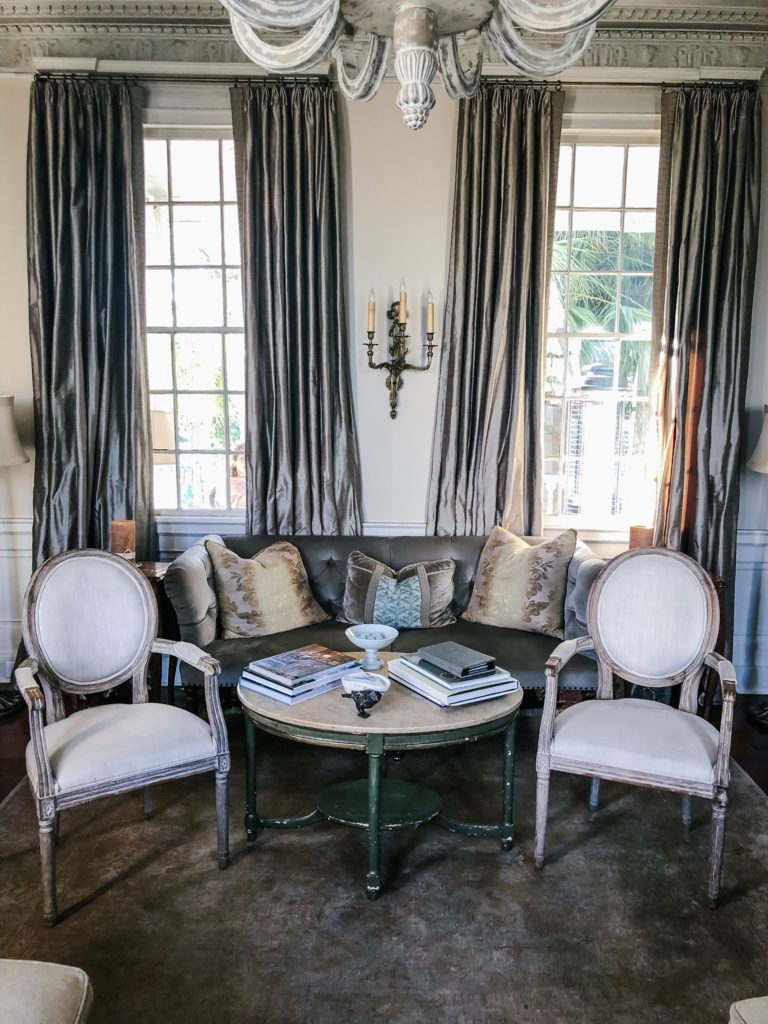 For the past two trips that I have been too in Charleston I have had Sofia with me, at 6 months and then 1 years old, so you can imagine how having a kid free vacation means a lot more of seeing things at a quicker pace.  Since we only have 2 fulls days to see the city we did a lot of it via bicycles that were complimentary from Zero George.  It is first come, first serve, but I highly suggest doing so because the city of Charleston is actually pretty small and you can get around so much easier and quicker to all the places you want to go to.  FYI- When riding a bike make sure to ride on the street and not the sidewalks…otherwise you will get a $500 fine. 😉 We did that a few times and people kept telling us to “nicely get off.”

King Street – This is the Main Street in Charleston and one that will take you from the top of the city of Charleston, all the way to the water ends.  You would all actually be surprised because we did not buy ONE THING!! Shocking I know, but we didn’t.  King Street is know for the location to find anything and everything you want from shopping to restuarants, bars, antiques and more.

The Battery – The gorgeous and huge houses along the peninsula are definitely a must see. Apparently these homes were built by some of the wealthiest families in the city and I’m not surprised.

Rainbow Row– The iconic Charleston site is a series of houses near the water front painted bright pastel colors. Again, another charming stop and must see in the city in my opinion.

Charleston City Market – The city market is a must when visiting Charleston because it is a street long open market that is the #1 attraction when coming to the city and the pieces are all made in Charleston.

Republic – MOMS NIGHT OUT!!! We ended up getting their super early and we got lucky enough to be given free bottle service for the night. WOOT WOOT!!! Rebekah literally said she wanted to hear some “top hits” and we finally made it happen. 😉 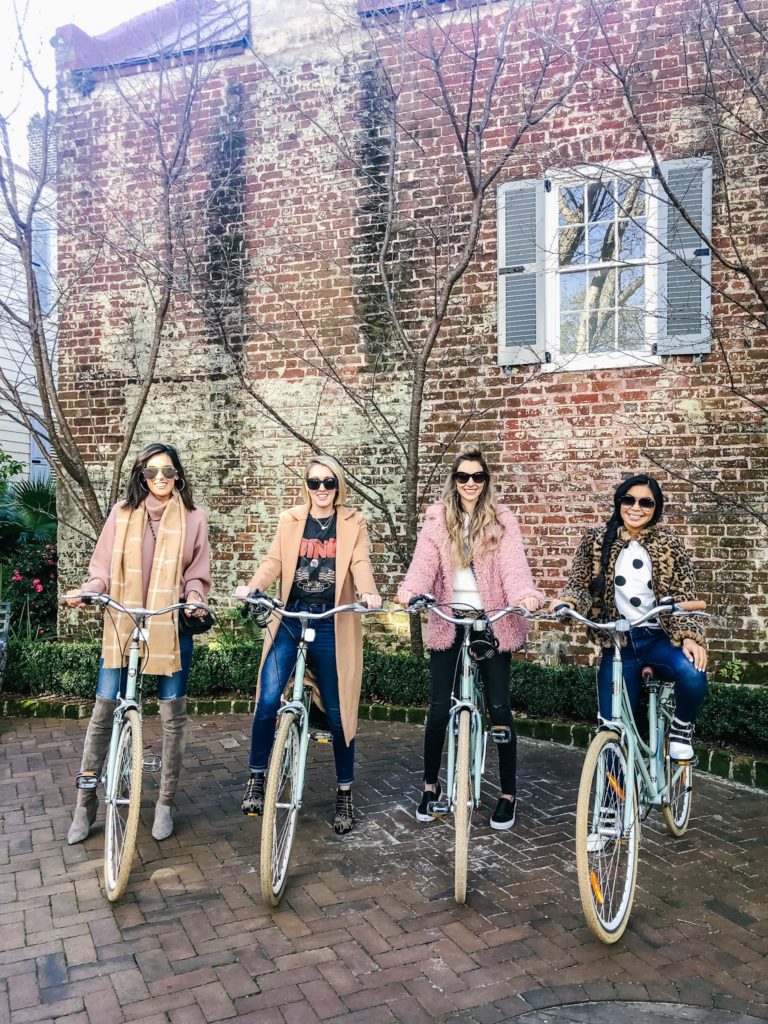 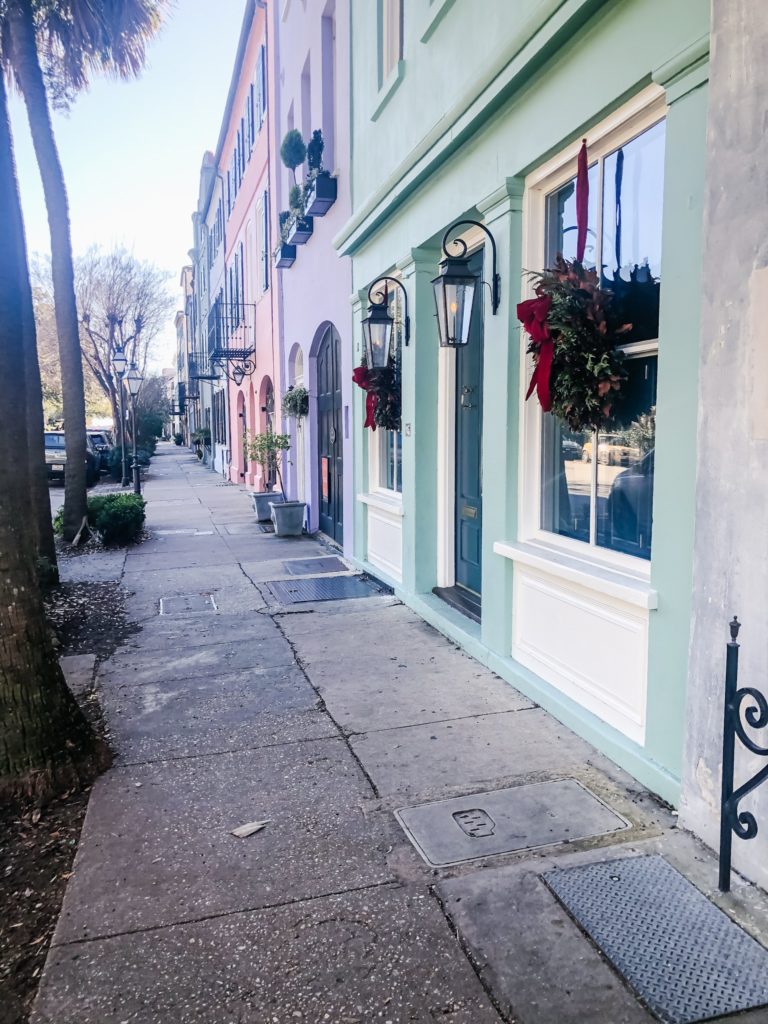 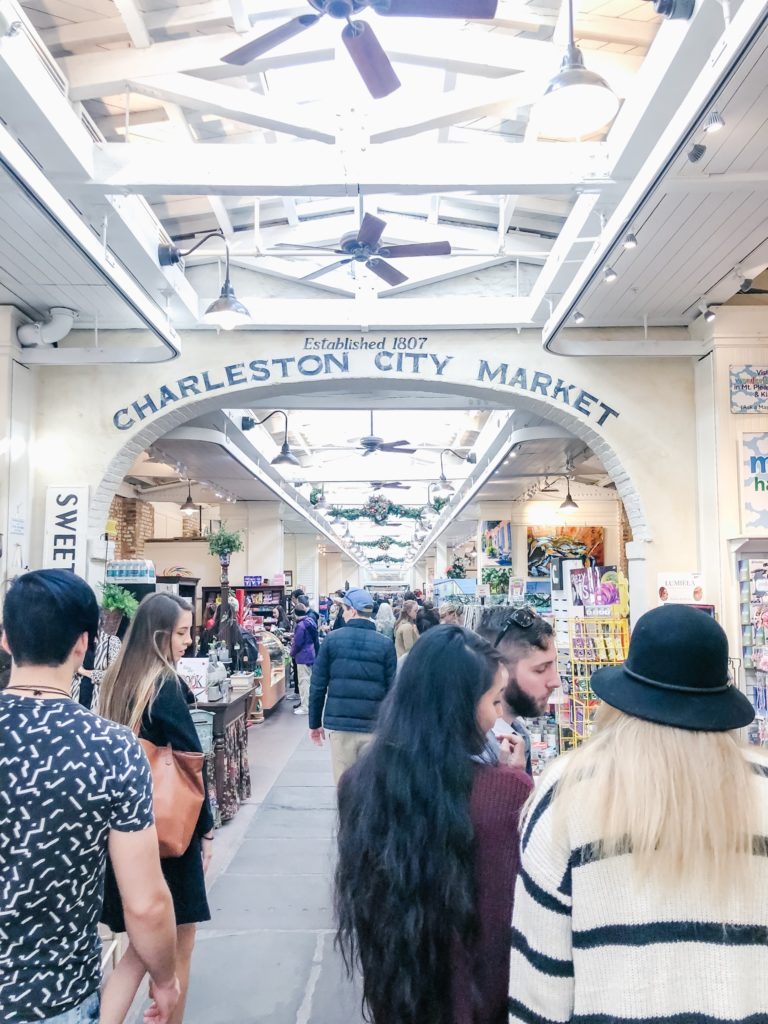 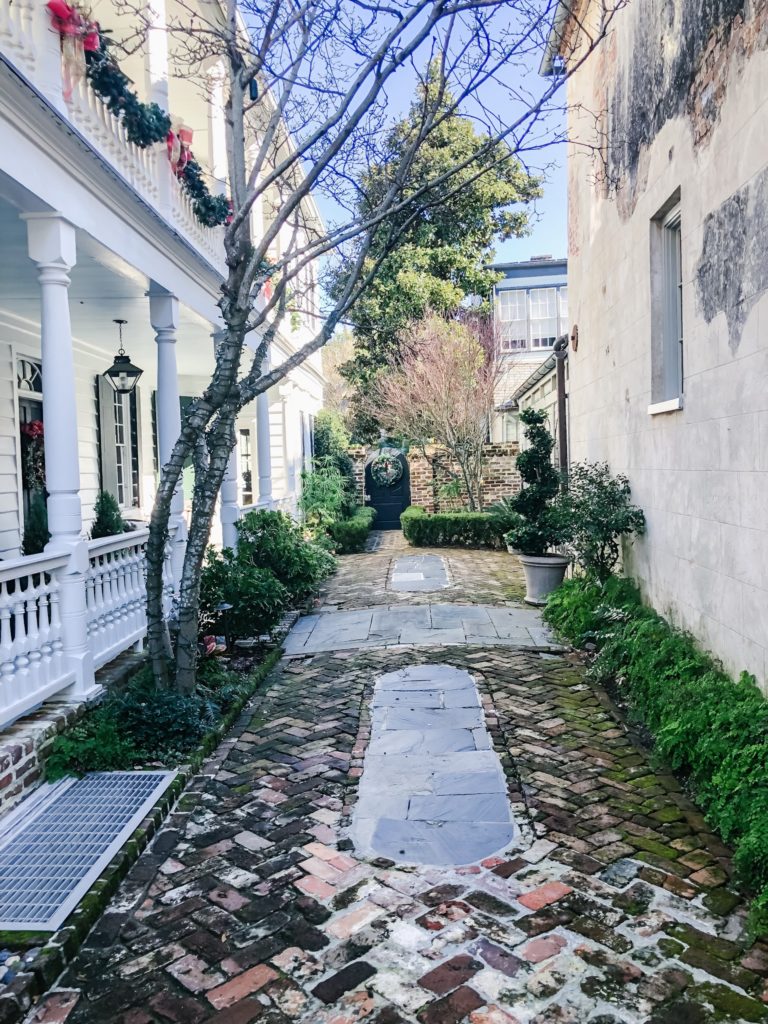 Dinner at The Darling Oyster Bar– This was the first place we went to and it was actually my second time eating there, but this time after 6pm. ;). The food was amazing and Roselyn and I shared this crispy chicken that was to die for…but I am so glad we shared because it was HUGE!!

Brunch at One Broad Street– For our second day and after shooting and then doing a quick walking our around the city we ended at this place which had a some really good southern style food.  It was exactly what we needed because we were staving.

Jeni’s Ice Cream – After a few hours of biking around the city and still having 3 hours until we had to head to dinner we decided to make a pit stop at Jeni’s, which is very well known in Charleston.  If memory serves me right I got a salted peanut butter with chocolate ice cream and I was obsessed, thanks Rebekah.

Dinner at Husk – So I have been trying to get a reservation here every time I have come and after finally going I can officially say it is overrated.  There was nothing special about the food, the place or anything and I am not sure why it gets such amazing reviews.  At least I can say I have gone, but I won’t be going back again anytime soon.

Breakfast at Millers All Day – Rebekah’s friend knew the chef there so we decided to go for breakfast on our last day and it was super yummy, but the place was the cutest!!! Kind of reminded of me local foods here in Houston.

Thank you all so much for following along and if you have any questions don’t hesitate to ask. 🙂 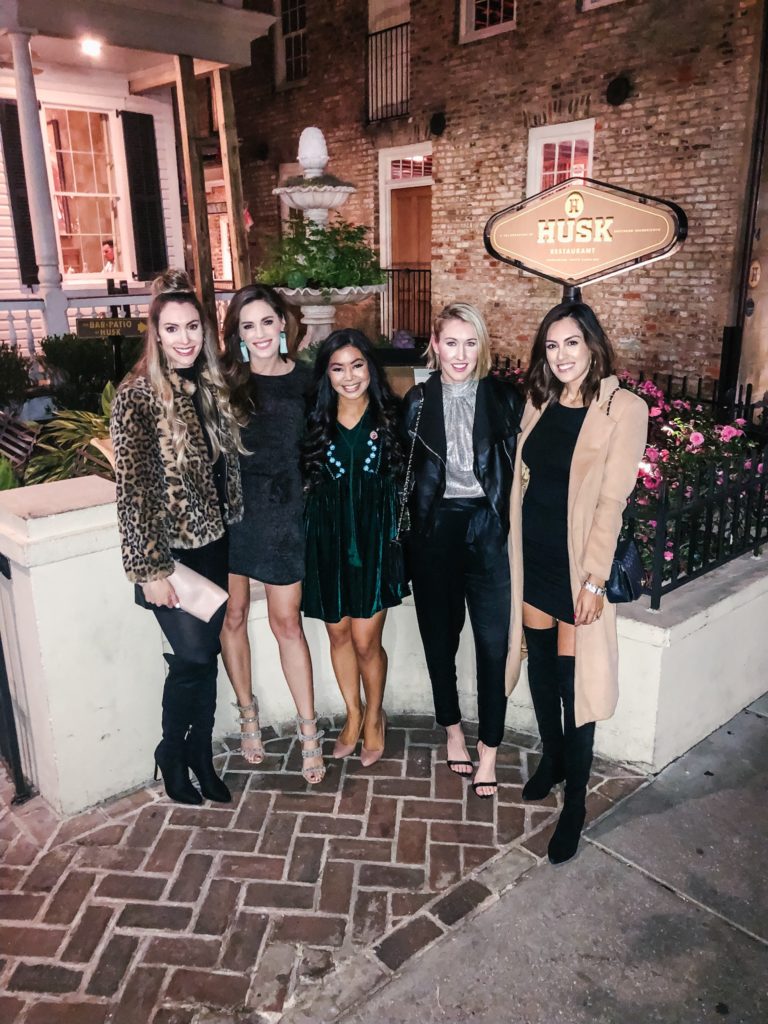 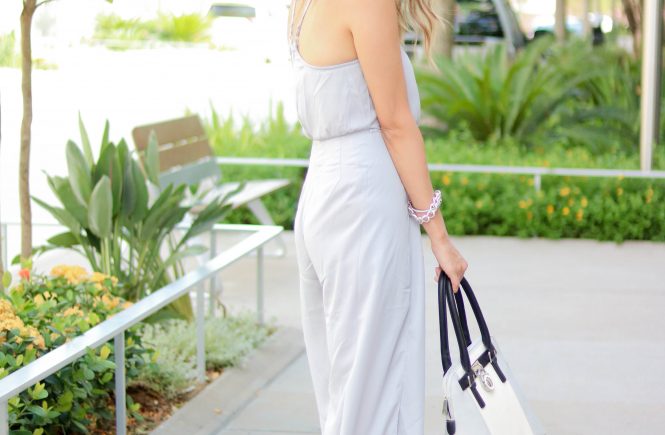 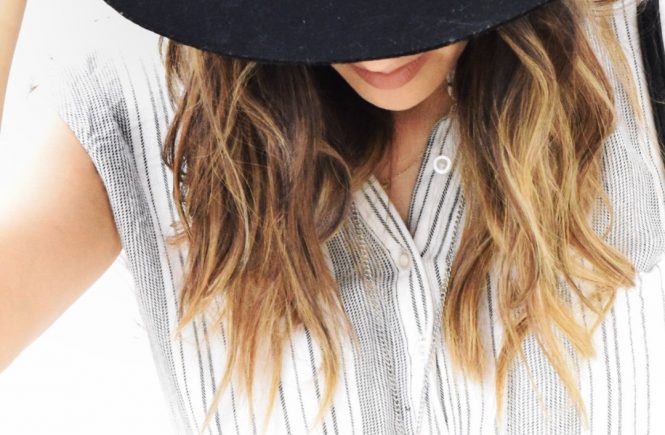 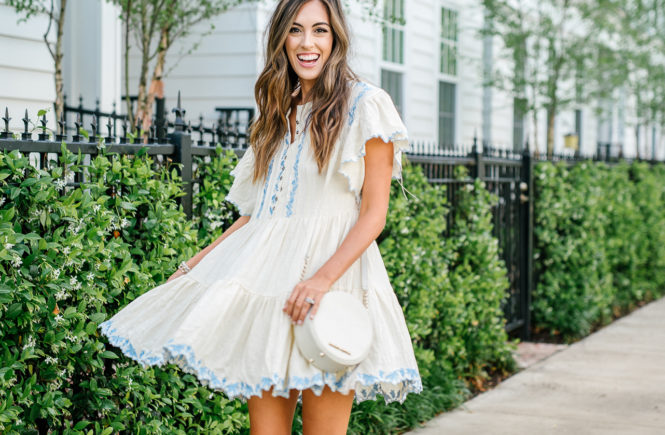