3 Days in Barcelona/Sitges with a Toddler

Traveling from Paris we made it to our last European city for our anniversary vacation to Barcelona, Spain.  We visited the South of Spain last year and we excited to visit Barcelona this time around because we absolutely loved our time in the country last year.

The moment we arrived we knew we were going to love it.

Majestic Hotel- This hotel is stunning and even better than we expected.  When we arrived Sofia was gifted a teddy bear from the staff and she was so excited!!  We even had one incident where Sofia’s had almost got closed on the elevator and everyone came to our rescue the moment it happened.  It really freaked me out horribly but was so glad that Sofia was ok and nothing was wrong with her hand.

To make her feel better than gave her some games and more, but then when we went to the pool/had lunch the next day the gentlemen that helped me open the elevator door came and brought Sofia a pink seahorse and wrote her a kind note.  He stated that the seahorse would keep her safe and if she ever got scared he would protect..what hotel does that??  The staff was phenomenal and Albert Puig was officially named our Superman during out time there.

The hotel is gorgeous and located in an amazing part of town.  By that I mean it is right to Chancel, Louis Vuitton, Gucci and more…hello shopping!! 😉  Our hotel room was perfect with a large kind size bed, the couch was made for Sofia as a second bed, it had his and her sinks in a marble bathroom and the best part was we had the ONLY outdoor patio that had a wrap around porch.  It had a large sitting area, dining table with chairs and lounge chairs to tan at your leisure.  Perfect ending to out time in Europe. 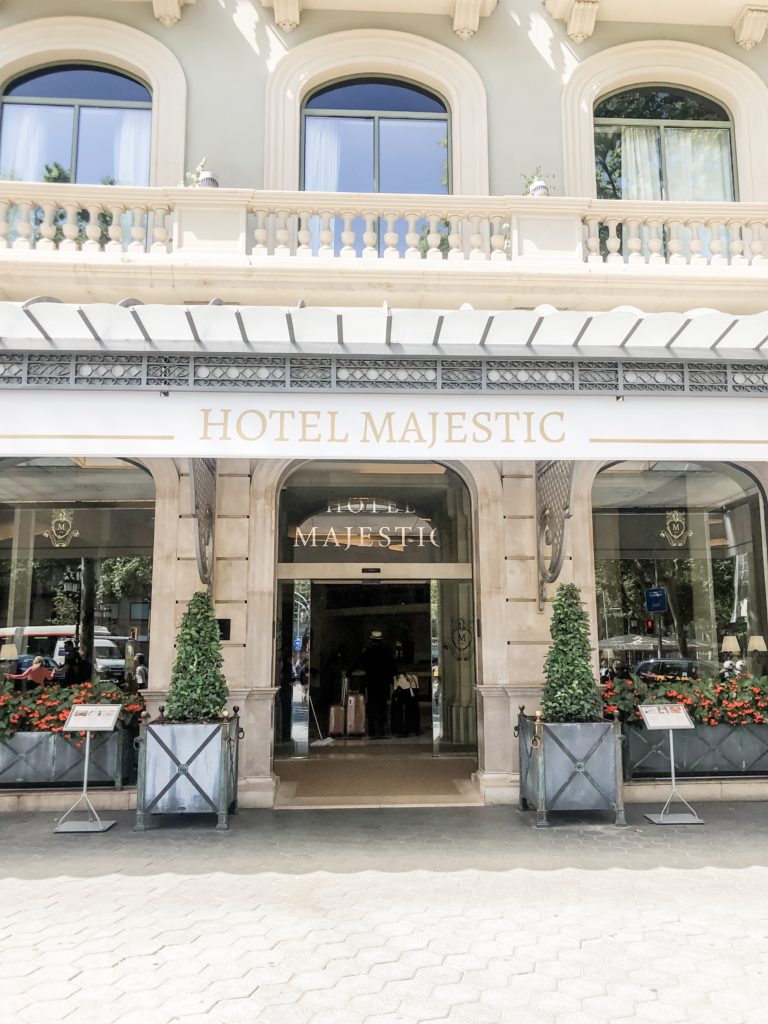 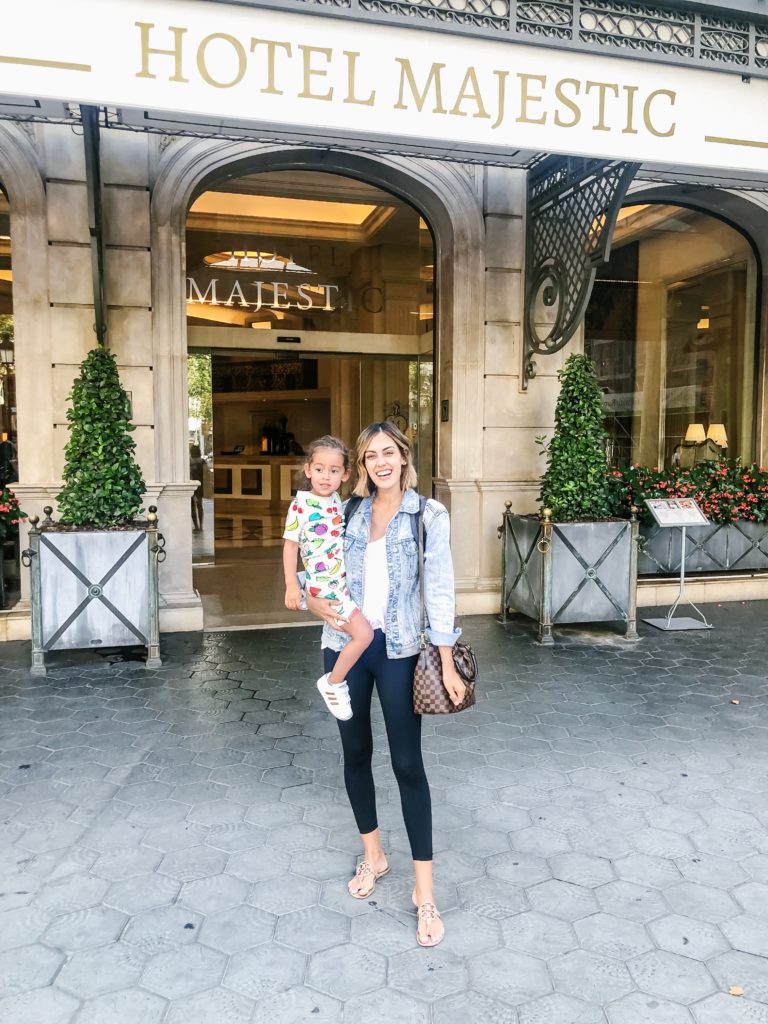 WHAT TO SEE/ DO

Drinks at Majestic Hotel- This is the hotel we stayed at and if you go to the top floor where the pool and restuarant is you will also get a magnificent view of the city from the La Sagrada to the ocean and further. 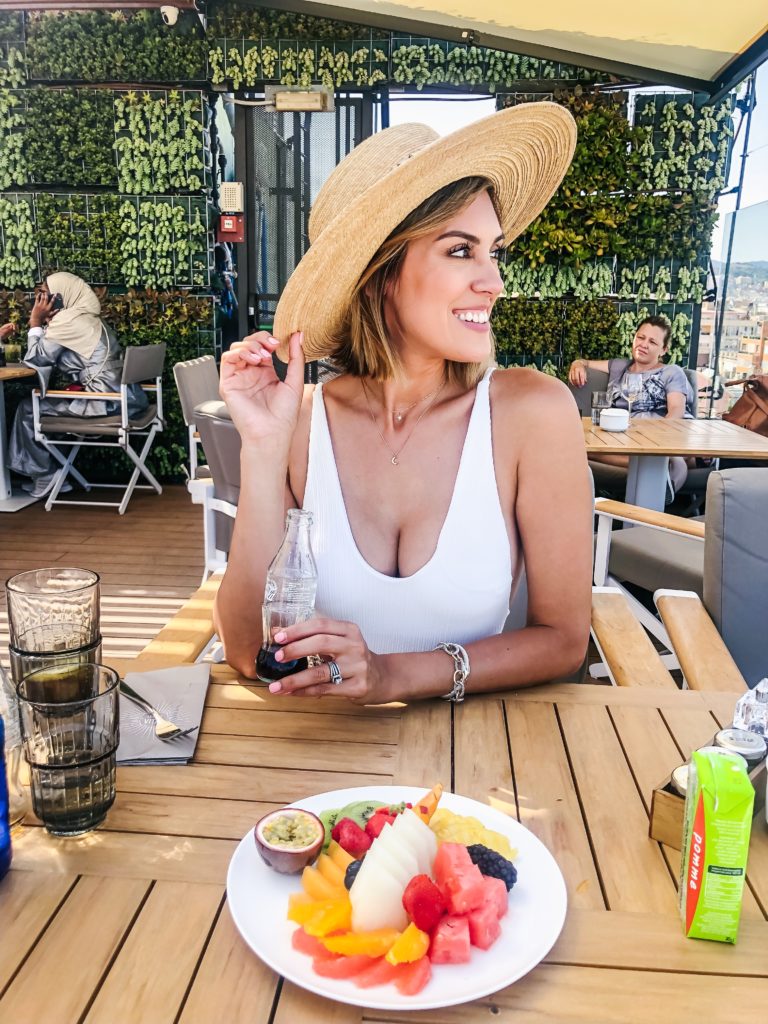 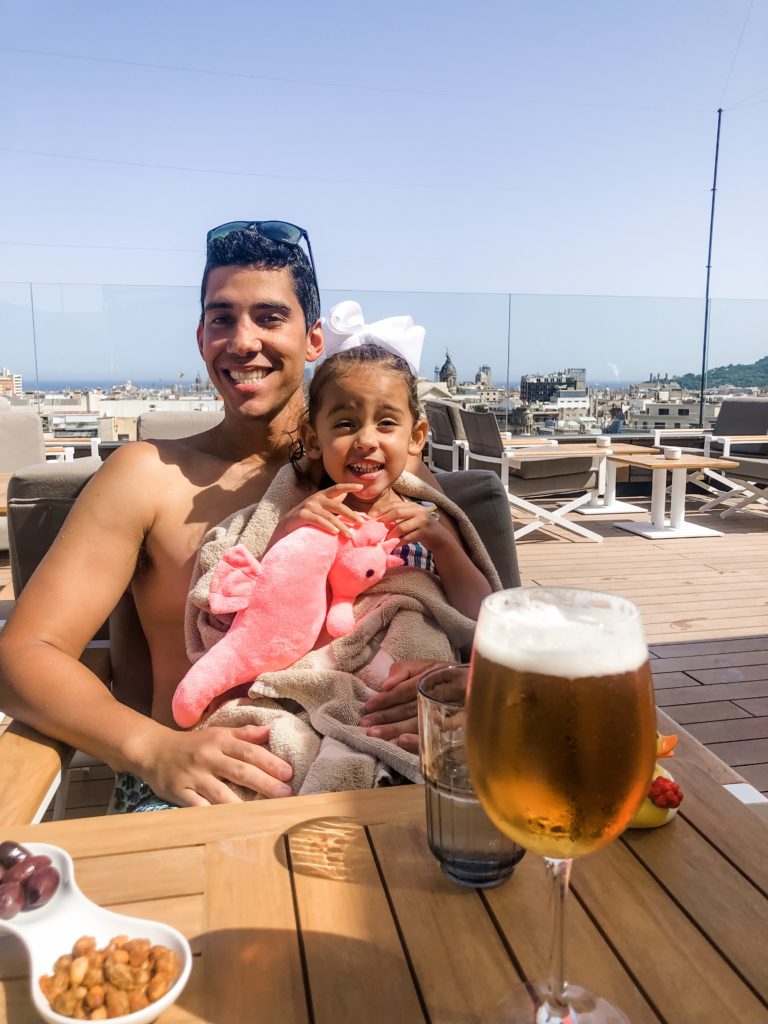 Gothic Quarter- This is the oldest part of the city that includes the remains of the city’s Roman wall and several notable medieval landmarks.  It has tons of restaurants, shops 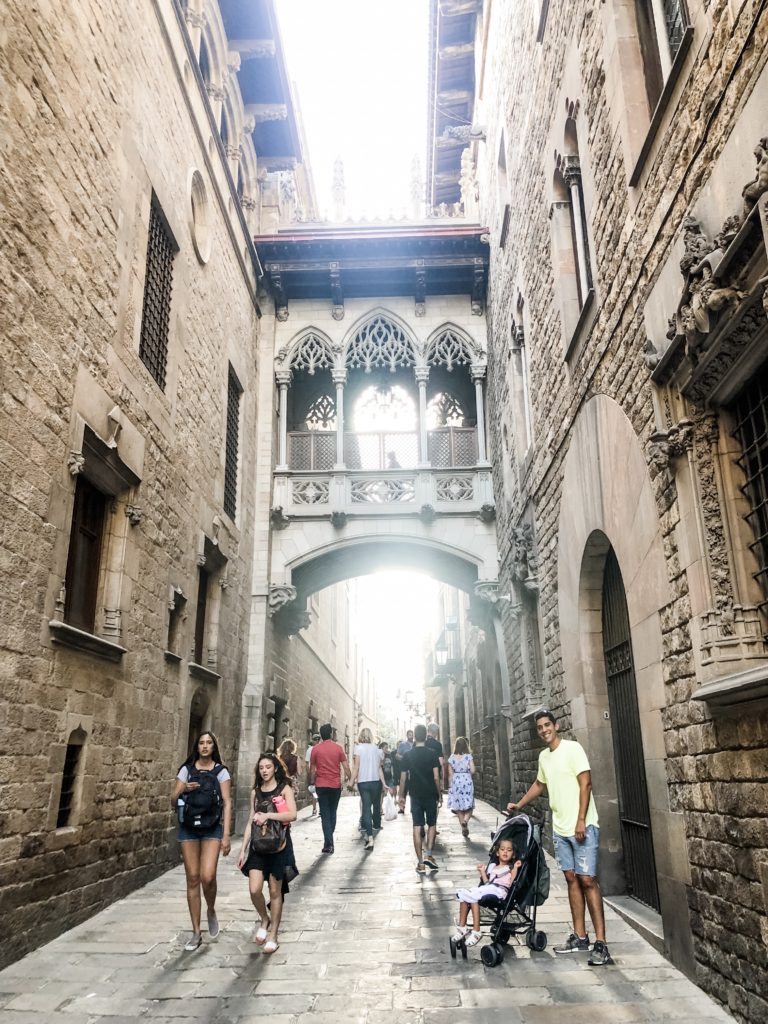 People watch at Placa del Rei -This is right behind the Barcelona Cathedral and when Christopher Columbus returned from the New World, it was here that the Catalan-Aragonese monarchs received him. The steps beneath the pointed arches of the Palau Reial (Royal Palace) are a pleasant place to sit and across from it there is an amazing place call where I had the best Mojito I ever have had in my ENTIRE LIFE!!!! if you can go make sure to get yourself one or two from there. 😉

Mercado- One of my favorite things about Spain is the Boqueria they have and they date back all the way to the 1200s.  With an immense amount of fish food from meat, fish to poultry and fruit to juices. 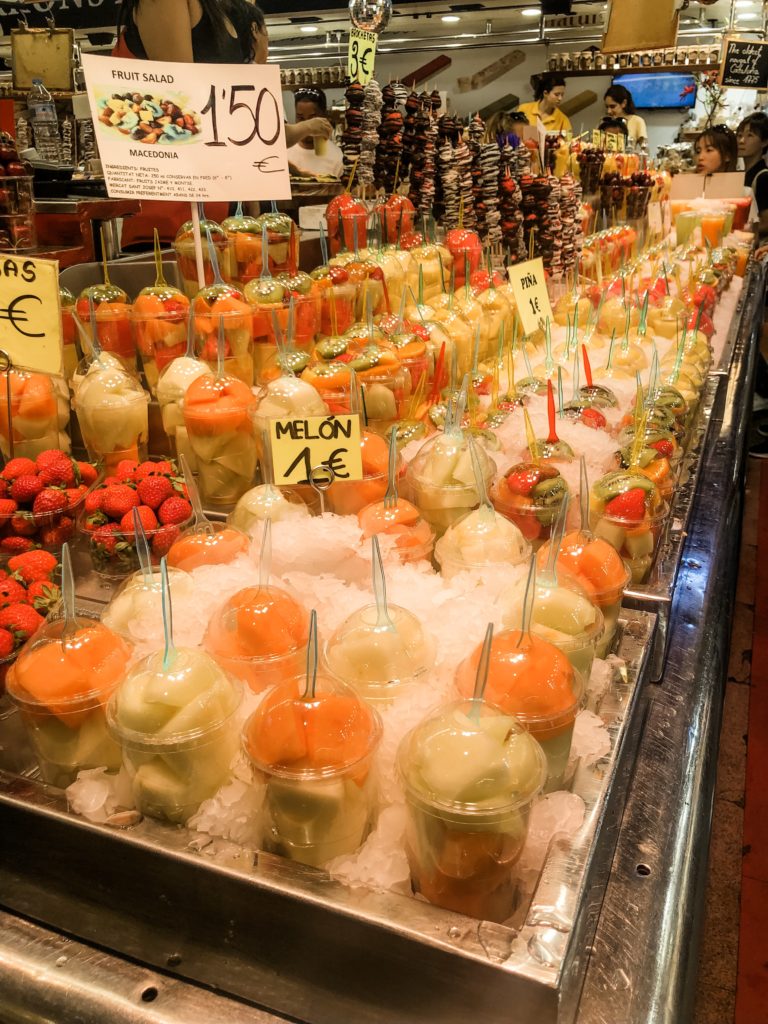 La Sagrada Familia- This was an absolute masterpiece and breathtaking from the moment you see it outside to walking inside.  It starting construction in 1882 and the architect resigned and Gaudi took over.  He passed away in 1926 and it looks like it should complete construction 100 years to the date in 2026. 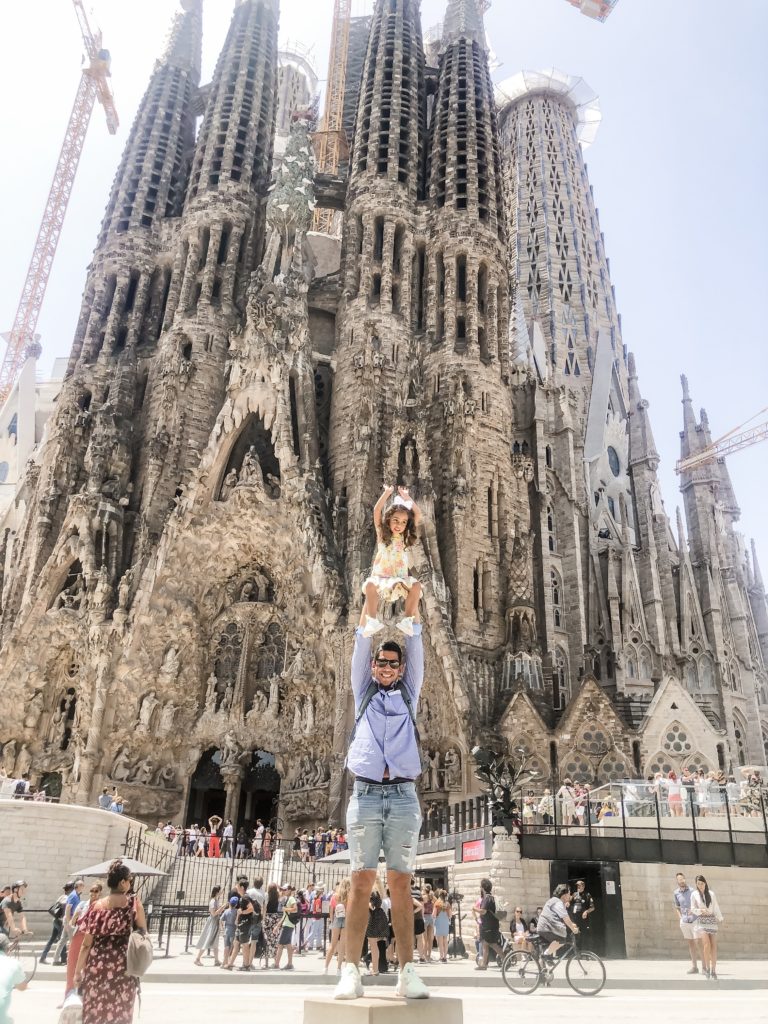 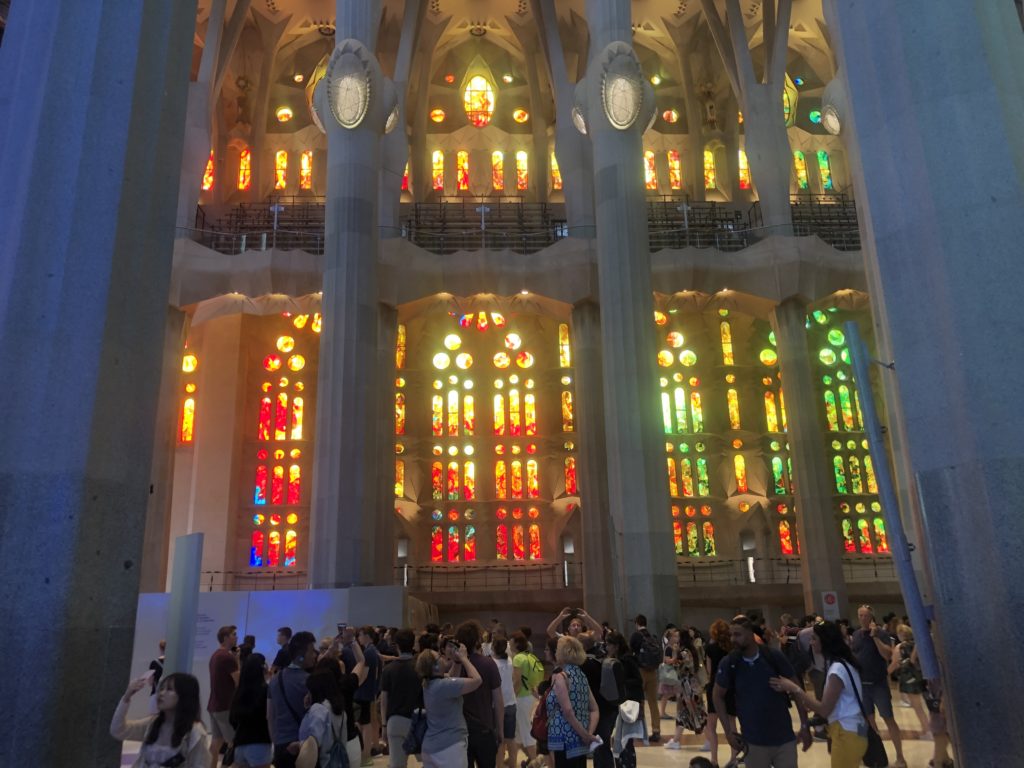 Parc Guell- We booked the 730pm tickets and it was perfect since it was cooler, the sun was going down and it was great it you have a child/children and want them to burn off some extra energy before or after dinner.  This park is also a reflection of Gaudi’s work. 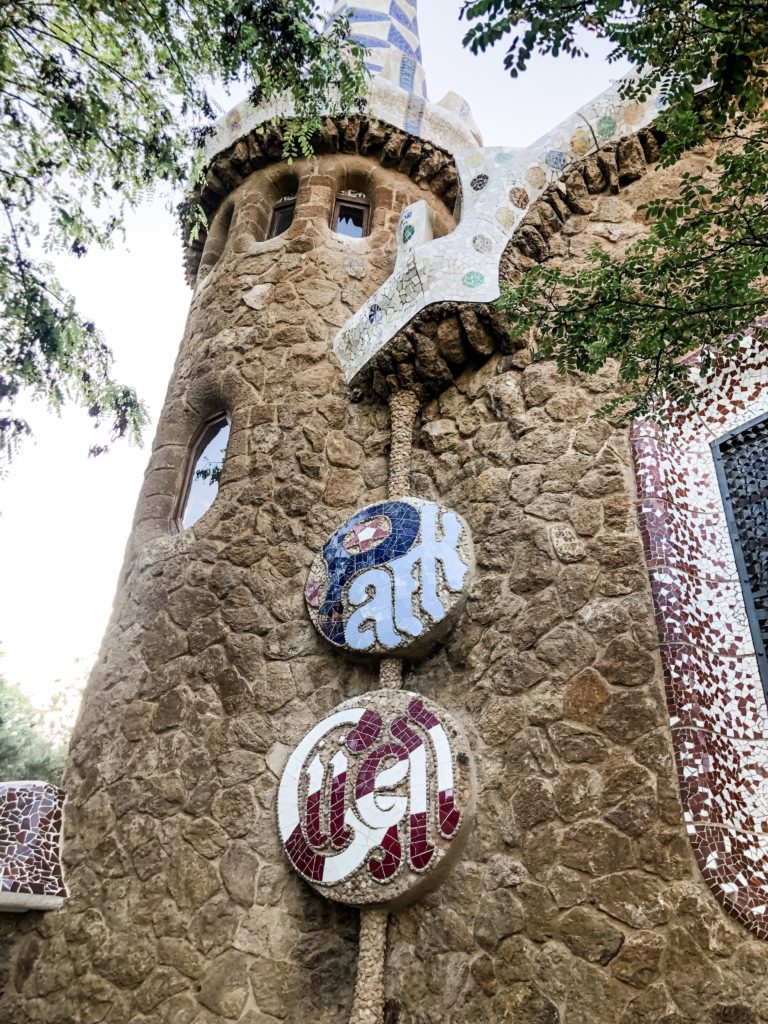 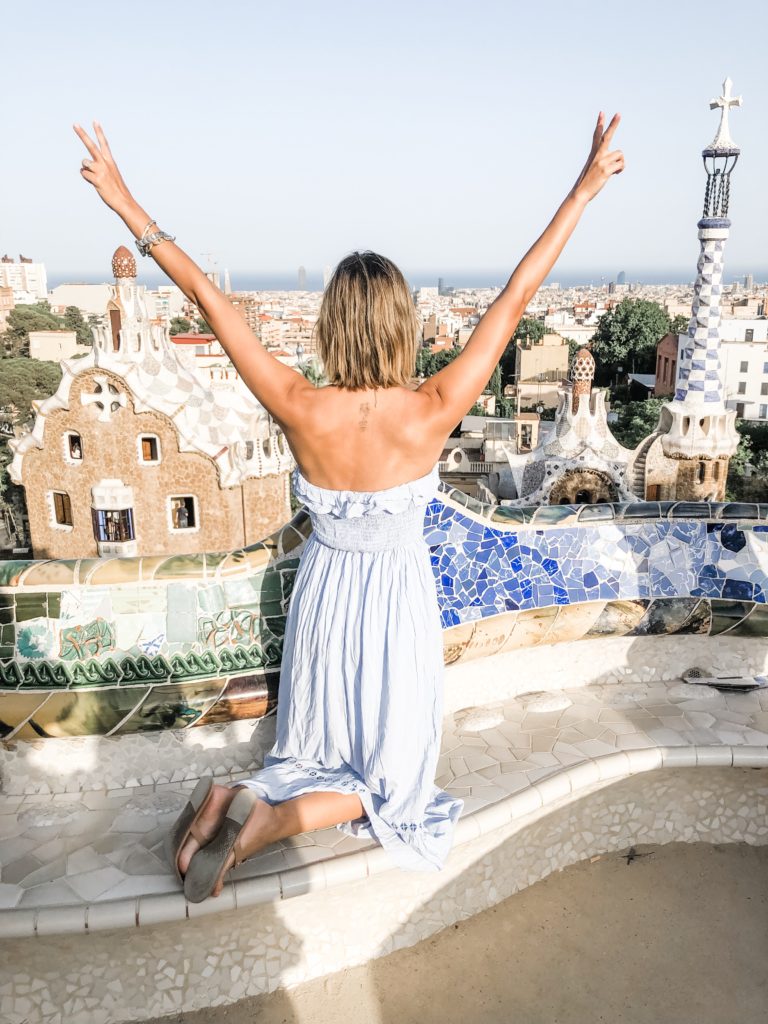 Take a day trip to Sitges which is a gorgeous beach town only 30 minutes away by the local train.  Once we got there we immediately loved it and were so excited we went.  It reminded us so much for Santorini/Greece and Cordoba in Southern Spain that we visited last year.  The entire city is a pure white with tons of florals everywhere, blue doors and lots of yummy restaurants and shops. 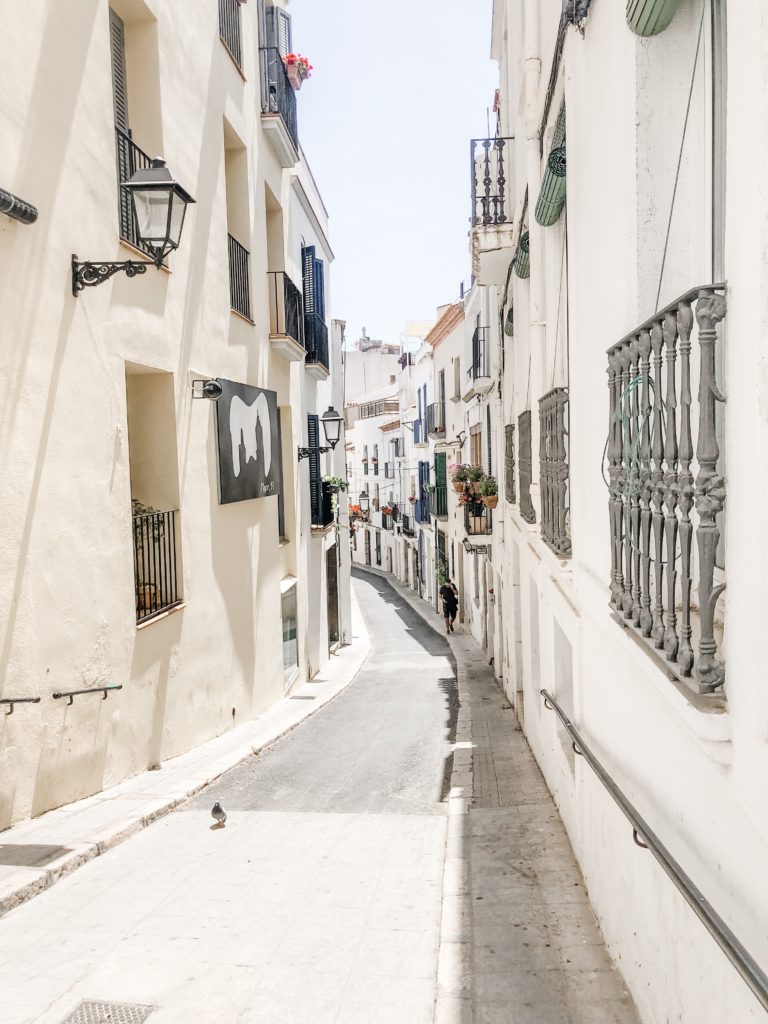 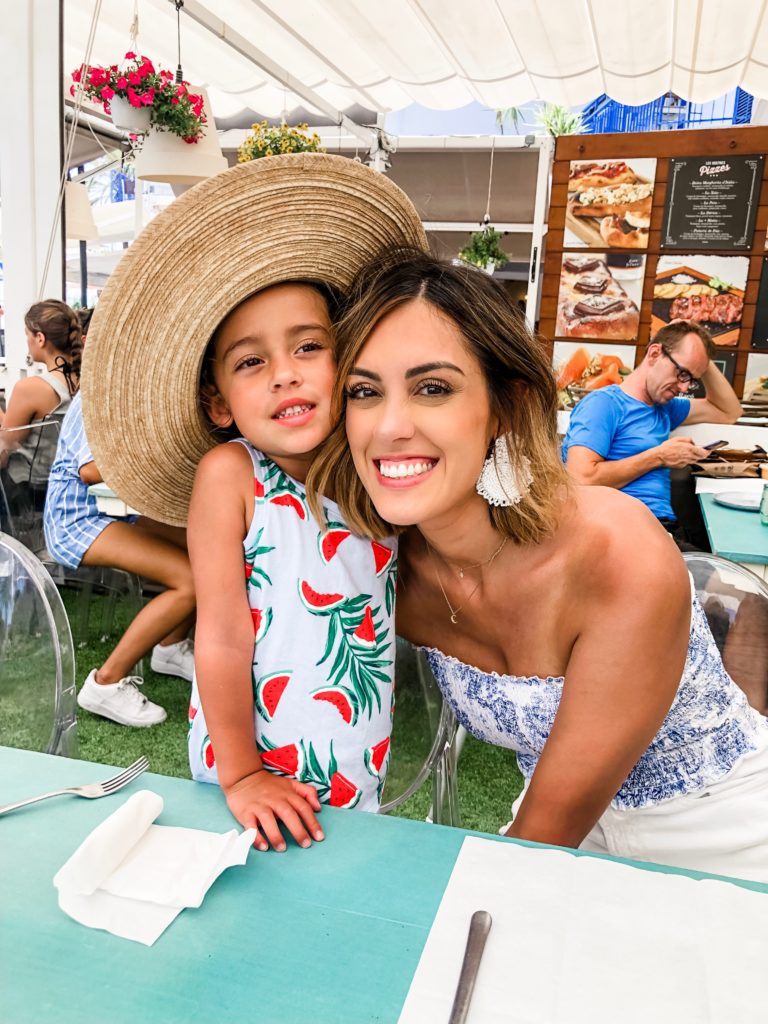 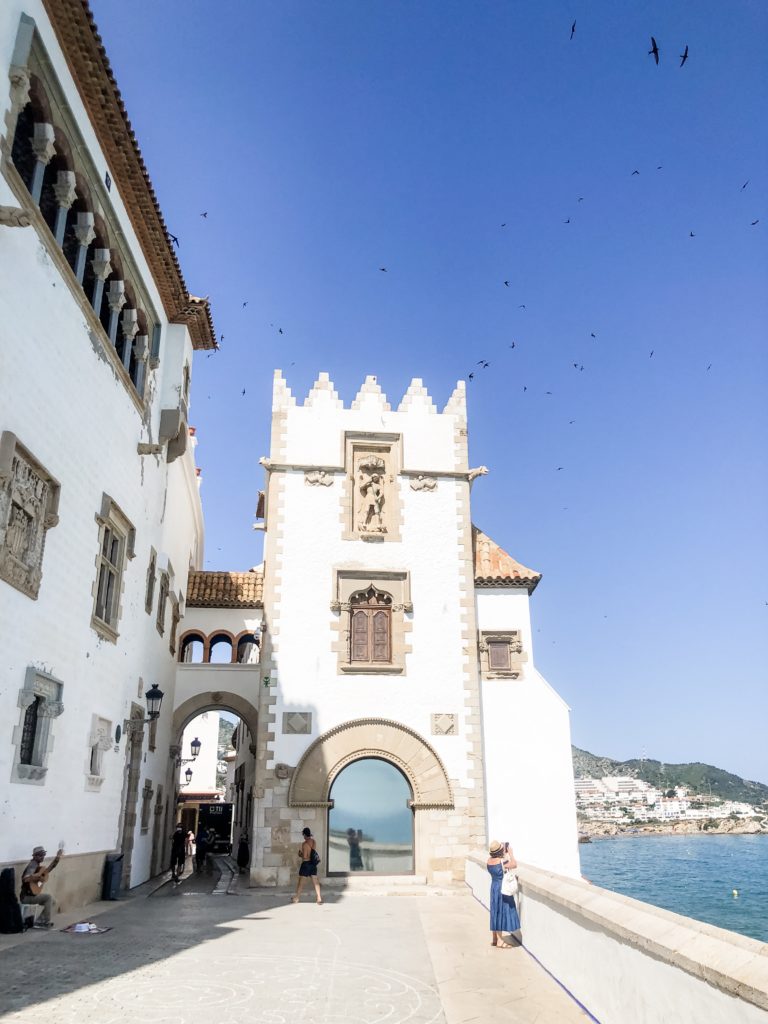 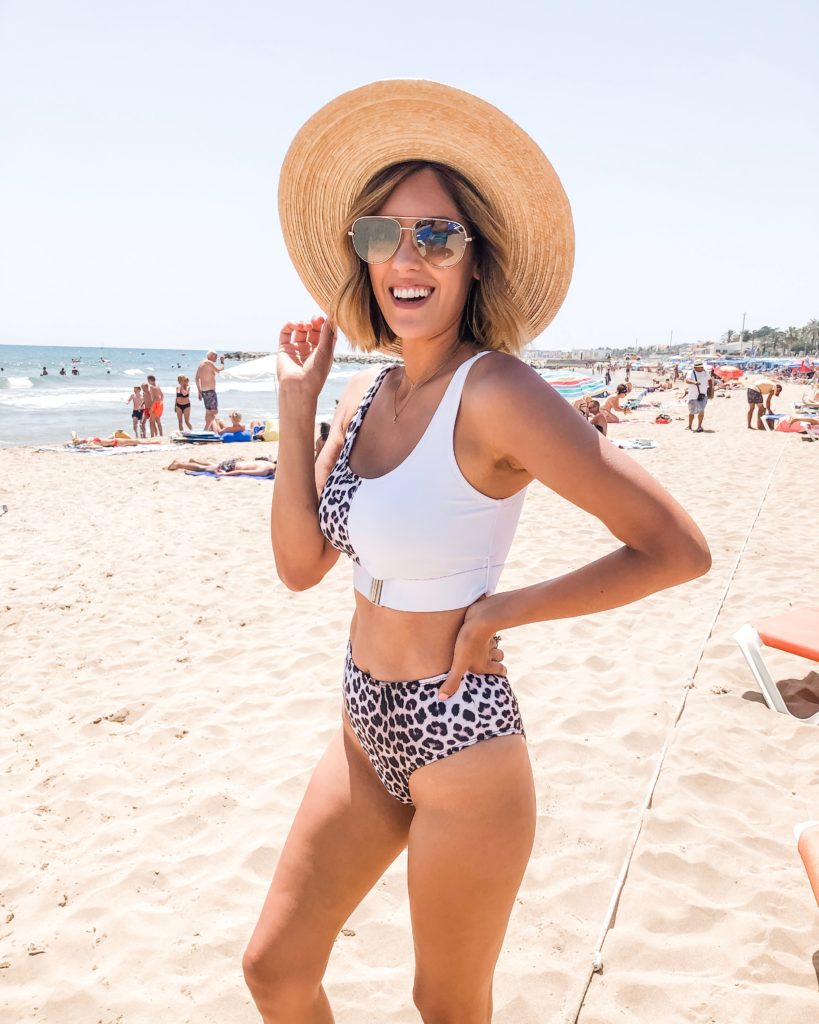 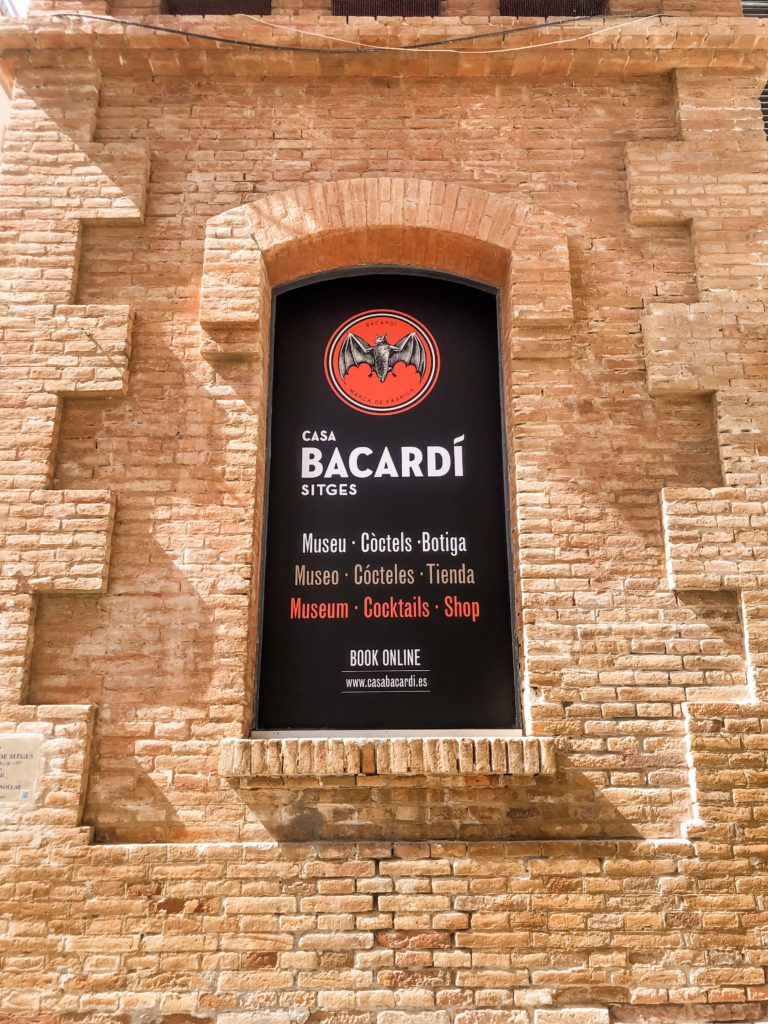 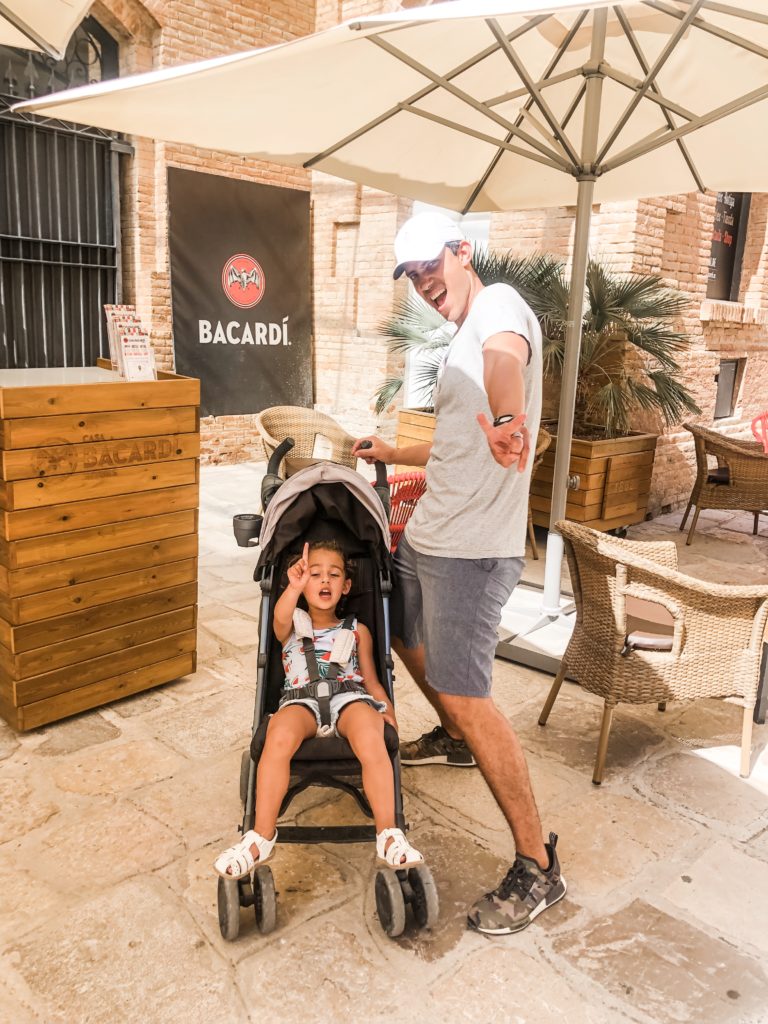 Spanish Time- Spaniards love to wake up late and stay up so do the exact same.  If you were to go on American time you would be walking around and waiting for things to open and the city to wake up.

Siesta’s- During mid day a lot of small stores/boutiques and even restaurants will close, so this is why channeling your inner Spaniard to go on their schedule. 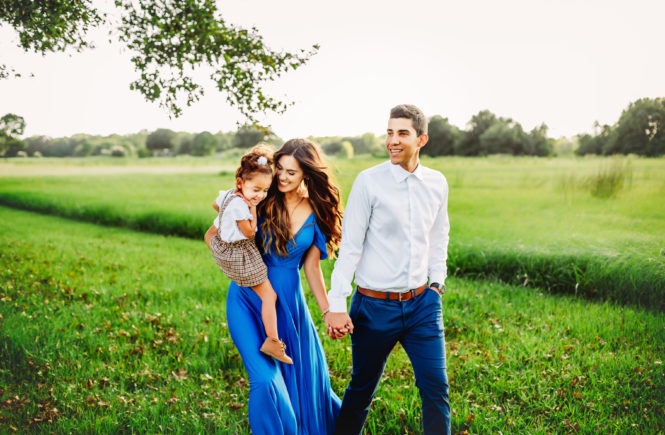 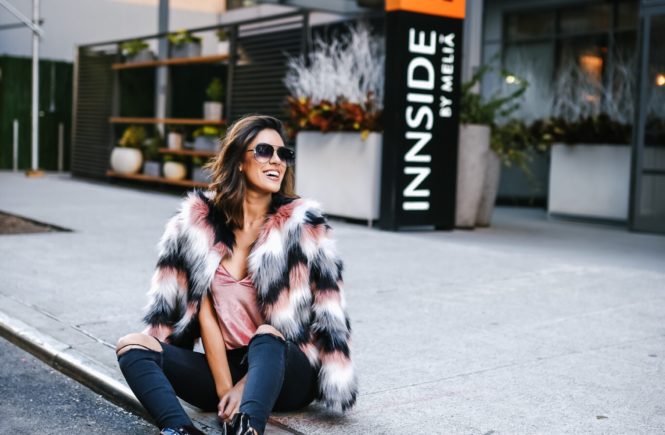 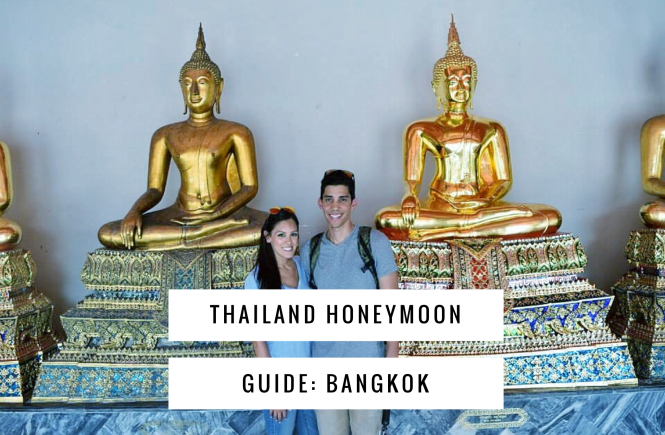